As President Trump touts a fast withdrawal of troops from the Middle East as part of a first-term campaign pledge, Joe Biden is calling for a slower move, and for the U.S. to maintain a military presence in the Middle East. 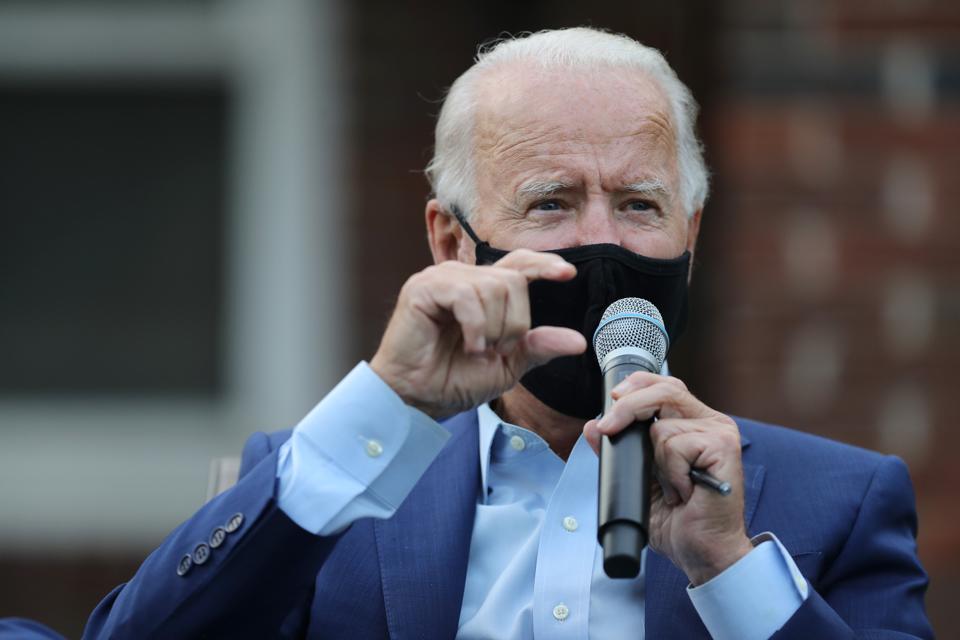 DETROIT, MICHIGAN – SEPTEMBER 09: Wearing a face mask to reduce the risk posed by the coronavirus, Democratic presidential nominee Joe Biden talks with members of the United Steelworkers union in a supporter’s back yard September 09, 2020 in Detroit.

In an interview Thursday with Stars and Stripes — a military publication funded by Congress that the Trump administration recently tried to defund, then changed course — Biden called for an “end” to “forever wars” and “drawing down the troops,” while stressing his concern about the possible resurgence of “terrorism and [the Islamic State].”

Trump made bringing troops home a part of his 2016 campaign pledge, and last week his administration cut troop levels in Iraq by about 40%, to 3,000 forces.

Biden told reporters earlier this week he supported Trump’s decision “as long as there’s a plan to figure out how he’s going to deal with ISIS.”

If elected, the Democratic nominee says he would want to maintain “1,500-2,000” soldiers on the ground in the Middle East to push back against ISIS, a figure lower than the current size of force.

The Pentagon has urged Trump to keep a small contingent of troops in Iraq — about 3,000 troops — to help in the fight against ISIS.

Trump has repeatedly called for the U.S. to exit the Middle East. “We’re bringing them home from Syria. We’re bringing them home from Iraq,” Trump said on “Fox & Friends” in August. “These endless wars, they never stop.” However, his public statements have yet to match his actions as president. Trump reduced troop levels in Iraq this week and dialed back the military presence in Afghanistan, but the U.S. still hasn’t completely pulled out of the region. Instead, the president’s draw down last week merely brought the size of force in the region to its 2015 level, 3,000. President Obama, who was sharply criticized by conservatives for pulling out of Iraq, reduced troop levels from a much higher level during his time as president (more than 100,000).

What To Watch For

Trump and Biden will both make separate stops in Shanksville, Pennsylvania on Friday to pay their respects to the victims of Flight 93, which crashed there on 9/11. Before departing for Shanksville, Biden told reporters he would not be “talking about anything other than 9/11” on Friday, because it’s a “solemn day.” Will Trump?

Trump was sharply criticized last week for a report in The Atlantic — which he has denied — that said the president has called fallen soldiers “losers” and “suckers.”

Polls have shown Trump’s support among members of the military has dropped since 2016.

Biden says US must maintain small force in Middle East, has no plans for major Defense cuts (Stars and Stripes)

This article was written by Jack Brewster from Forbes and was legally licensed through the Industry Dive publisher network. Please direct all licensing questions to legal@industrydive.com.