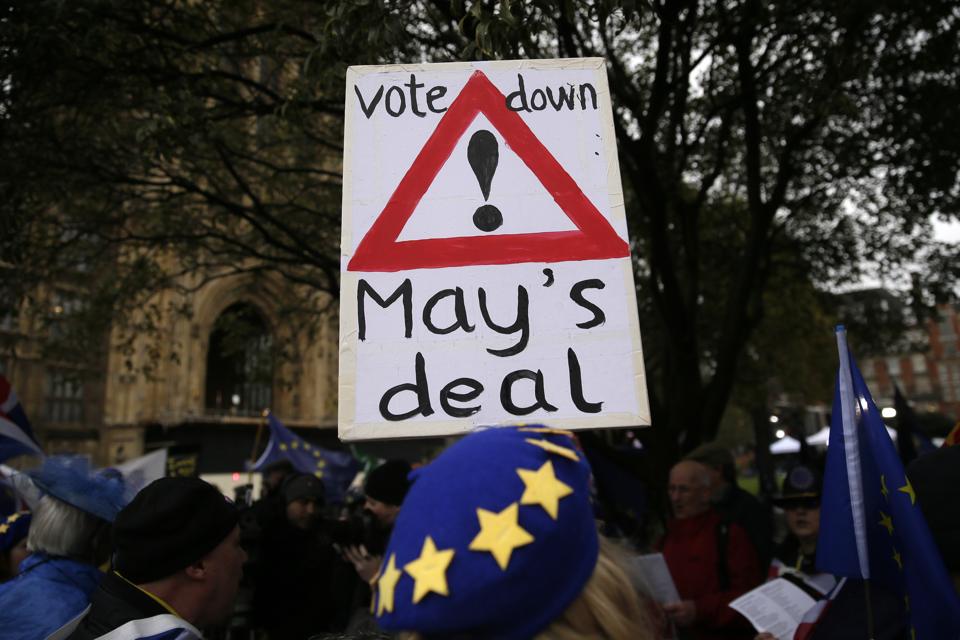 Anti-Brexit remain in the European Union supporters take part in a protest outside the House of Parliament in London, Tuesday, March 12, 2019. Prime Minister Theresa May’s mission to secure Britain’s orderly exit from the European Union appeared headed for defeat Tuesday, as lawmakers ignored her entreaties to support her divorce deal and end the political chaos and economic uncertainty that Brexit has unleashed. (AP Photo/Tim Ireland)

Now that parliament has essentially taken hard Brexit off the table –– as we have been predicting for over a year –– our latest Brexit Insight looks at the prospects for PM Theresa May’s long-derided Brexit plan, which remains very much alive. Although our signals are mixed, the core trend in Institutional Stability Risk for the UK continues to suggest a final deal will either be a relatively soft Brexit or, less likely, no Brexit at all.

To help unpack the implications for the GBP, we focus on our UK Policy Risk indicator, which has been most positively correlated with movements in the USD/GBP since the Brexit drama began –– and especially since the Brexit clock began ticking more loudly in January 2018. As visible in the figures below, UK Policy Risk and the USDGBP exchange have closely tracked each other, with a robust positive correlation of .82 across the full time period, providing evidence of GBP depreciation in lock-step with rising policy risk.

As shown in the figure below, a 60-trading day running correlation between UK Policy Risk and the USDGBP exchange rate (a correlation window equivalent to roughly one calendar quarter) turned negative in roughly mid-February 2019 (indicating a shift in the policy risk-pound relationship), which is now nearing an inflection point that we forecast will drive it back into positive territory, highlighting the potential for renewed risk to sterling as the Brexit negotiation deadline approaches or, alternatively, support for sterling if a soft Brexit deal is achieved or Brexit is rejected altogether. 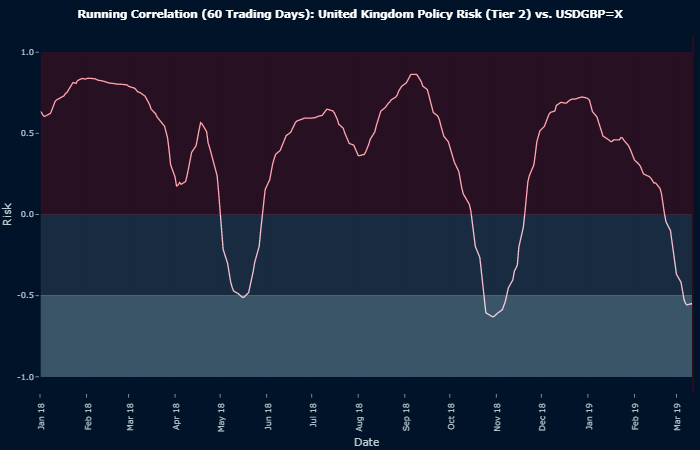 All this said, we also note a divergence between market reactions on the currency front – which is currently pricing in Brexit uncertainty – and longer-term bond markets, which appear to be paying significantly less attention. To wit: per the figures below, which plot UK Policy Risk against the yield on UK 10-year sovereign bonds and their running correlation, we find no meaningful evidence to suggest that rising risk has in turn driven long-term bond yields upwards, with a 60-day running correlation posting weekly negative results (-.33) from January 2018 – 2019 YTD. The relationship remains virtually unchanged when shortening the time period to 2019 YTD only (at -.35), implying a high degree of consistency in bond markets lack of reaction to Brexit dynamics.

All this said, we also note a divergence between market reactions on the currency front – which is currently pricing in Brexit uncertainty – and longer-term bond markets, which appear to be paying significantly less attention. To wit: per the figures below, which plot UK Policy Risk against the yield on UK 10-year sovereign bonds and their running correlation, we find no meaningful evidence to suggest that rising risk has in turn driven long-term bond yields upwards, with a 60-day running correlation posting weekly negative results (-.33) from January 2018 – 2019 YTD. The relationship remains virtually unchanged when shortening the time period to 2019 YTD only (at -.35), implying a high degree of consistency in bond markets lack of reaction to Brexit dynamics.

We attribute the divergence between currency and bond markets to the UK’s moderate debt to GDP ratio of 87% and low inflation, marking a strong ability to service the debt. Perhaps more importantly, Brexit uncertainty aside, the UK government’s desire to maintain the GBP’s reserve currency status and keep London as a center for international finance makes willingness to service the debt sacrosanct.

Despite this past month’s tensions between India and Pakistan, economic policy risks continue to preoccupy markets in the run-up to the April/May 2019 general elections. Below we use the GeoQuant system to explore the relationship between the USD/IDR exchange rate and our set of daily political risk indicators for India, listed in order of strongest correlations across a set of trading day lags. Note that from Q3 2018-2019 YTD, economic policy risks dominate the list, with security-related risks falling slightly behind. This pattern is in line with much of our recent India work (see here on economic policies and here on the recent tensions with Pakistan), which argues that India faces long-term macro-economic risks due to fiscal policy loosening in the run-up to the 2019 elections, with effects that are likely to persist thereafter. By contrast, as argued in our most recent Insight on India-Pakistan tensions, we view further escalation of the conflict with Pakistan as unlikely in the short-term, with the results presented below suggesting that market actors tend to agree. 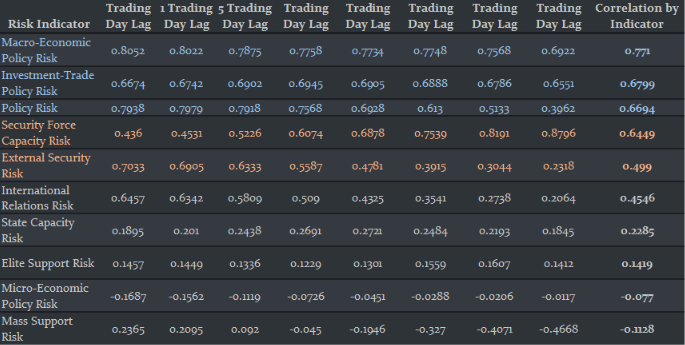 Our India general election 2019 Insight – slated for release this coming week – will delve deeper into each set of issues’ implications for the upcoming campaign season, with BJP rivals – most notably the Congress Party – simultaneously calling out Modi for underwhelming results on the economic front and over-politicization of security threats in light of the recent terrorist attacks in India-administered J&K.

Romania: Public unrest provoked by threats to rule of law

Thousands of protesters in more than 10 cities have been gathering, as recently as 10 March, to protest an emergency decree that limits the prosecutor general’s powers in favor of a newly established judicial entity charged with investigating magistrates. This is the latest conflict in an ongoing legal and judicial battle between the ruling Social Democrats (PSD) and the opposition National Liberal Party (PNL) for control over the state apparatus in general and the legal system in particular.

Romania currently holds the rotating EU Presidency and is attracting increased international scrutiny of its domestic affairs. EU leaders have repeatedly urged Bucharest to intensify anti-corruption efforts and improve adherence to the rule of law. Instead, the two largest political parties have used the EU platform to highlight their differences, with the ruling PSD party publicly criticizing the candidacy of former Romanian anti-corruption chief Laura Koevesi for a senior EU position. 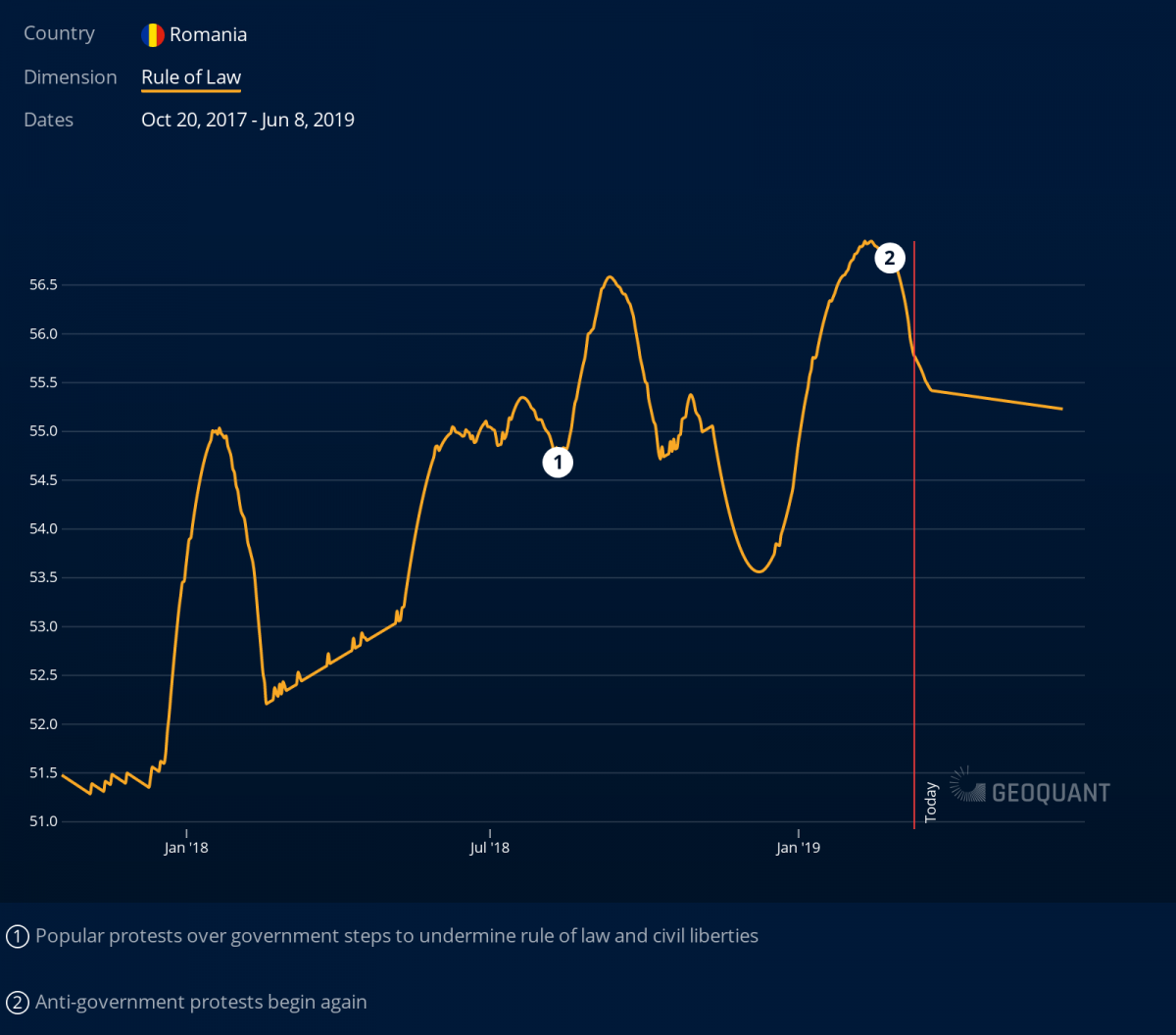 GeoQuant’s tracking of these events show Rule of Law Risk rising since summer 2017, and now approaching the most recent peak in January 2017, when the PSD government introduced legislation to decriminalize abuse of power and grant pardons to thousands of convicted criminals, including Dragnea. As a result, Rule of Law Risk, though volatile, has been increasing steadily since early 2018. This doesn’t imply an imminent crisis, but it deserves monitoring as both parties maneuver ahead of a November presidential election.

This article was written by Mark Rosenberg from Forbes and was legally licensed through the NewsCred publisher network. Please direct all licensing questions to legal@newscred.com.