Could We Blunder Into A Nuclear Arms Race In The Middle East?

Could We Blunder Into A Nuclear Arms Race In The Middle East?

Between potentially mishandling the Iran Nuclear Deal, and alienating the burgeoning nuclear power programs in the Middle East, the United States risks bungling an opportunity to direct the region’s nuclear future and, instead, might cede that leadership to Russia, China or South Korea.

Saudi Arabia is looking to acquire nuclear technology in the form of a civilian nuclear power program. Which sounds good – similar to what the United Arab Emirates is doing. Since actual nuclear power has nothing to do with weapons, that’s great.

If the White House does not extend sanctions waivers under the Iran Nuclear Deal by the May 12 deadline, things will get very complicated. The Deal could fall apart, the United States might try to re-impose sanctions unilaterally without the support of Europe or Asia, and would push our allies and adversaries into a complex Q&A of ‘Will Iran restart its nuclear weapons program?’ or ‘Who gets Iranian oil?’ or ‘Who keeps doing business with U.S. banks?’ 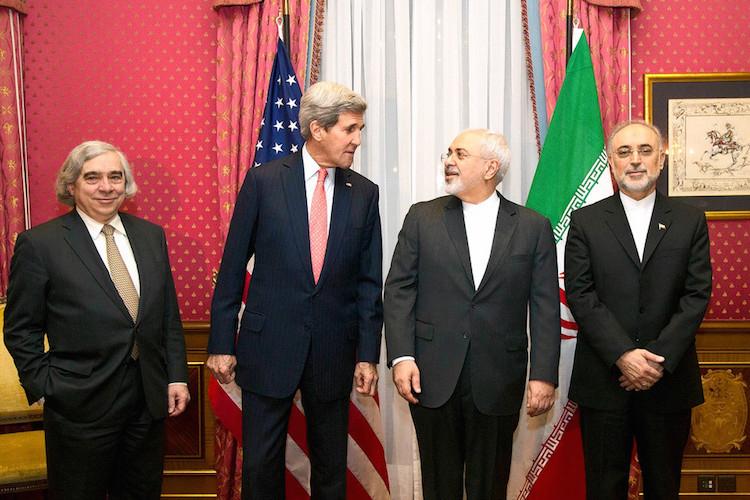 The Iran Nuclear Deal, a joint effort by scientists and diplomats, needs to continue in order to prevent an nuclear arms race in the Middle East. Shown here are the primary scientists of that Deal, then-U.S. Secretary of Energy Ernest Moniz (left) and head of the Atomic Energy Organization of Iran Ali Akbar Salehi (right), standing on the outside, and the diplomats, then-U.S. Secretary of State John Kerry (left) and Iranian Foreign Minister Mohammad Javad Zarif (right), standing on the inside.

The Saudis have already stated that if Iran acquires nuclear weapons, then Saudi Arabia will as well. The new Saudi leader, Crown Prince Mohammed bin Salman, seems not afraid to take bold actions.

Which makes America’s role thorny. We’re not supposed to support a country’s civilian nuclear power program if it looks like they will also build a nuclear weapons program. For seventy years, America has strongly regulated trade in nuclear materials, equipment, and technology to deter, limit or slow the possible use of these materials, which were designed for peaceful purposes, to help make nuclear weapons.

Saudi Arabia, which has no nuclear power plants, plans to construct sixteen reactors over the next 25 years. The Kingdom has solicited bids for the first two reactors and hopes to sign contracts by the end of this year. American nuclear companies are looking to bid on the multibillion-dollar project.

In February, Secretary of Energy Rick Perry led an interagency delegation to London to discuss a nuclear agreement with Khalid Bin Abdulaziz Al-Falih, the Saudi Arabian Minister of Energy and Industry. It would be a huge loss if the United States did not have a large role in the Saudis’ nuclear future given our lead in safety and all-things nuclear.

Last month, Sharon Squassoni from the Elliott School of International Affairs at George Washington University, testified before the U.S. House Committee on Foreign Affairs on the ‘The Implications of Nuclear Cooperation with Saudi Arabia’ and summed up the pros and cons of partnering with Saudi Arabia.

In the era of our Atoms for Peace program, the United States had nuclear cooperation agreements with Israel (1955-1960), Iran (1959-1964), and Lebanon (1955-1960). The U.S. signed an agreement with Morocco in 1980 which expires in 2022, with Egypt in 1981 which expires in 2021, and with the United Arab Emirates in 2009. The U.S. has been in discussions with both Jordan and Saudi Arabia for about ten years on nuclear cooperation agreements. Both countries have significant uranium deposits.

Squassoni points out that the risk of misuse of American material, equipment and technology is minimized by the stringent requirements for approving these agreements as provided for in the 1978 Nuclear Nonproliferation Act which amended the 1954 Atomic Energy Act, requiring, among other things, a range of safeguards, assurances and consents against using any of the materials or technologies in a nuclear explosive device or for any other military purpose.

One inducement to cooperation is that nuclear materials, enriched fuel and other sensitive equipment are supplied mainly by the Nuclear Suppliers Group, made up of various nations, which has incorporated several of these nonproliferation elements in its guidelines for harmonizing trade among different countries.

While American agreements are typically the most restrictive, a nuclear cooperation agreement with the United States is essential for other suppliers if their equipment contains American components, designs or technologies.

But according to Squassoni, some countries see value in negotiating an agreement with the United States not just for trade but because it allows leverage and access to broader nuclear commerce within the privileged nuclear group. The dominance of the U.S. nuclear industry has not yet faded entirely, giving United States nuclear cooperation agreements more leverage than they might otherwise have.

However, sovereignty rights loom as an issue with weapons of any kind, especially for those countries that fear attack by their enemies or being subsumed by larger players like the United States, China or Russia.

Countries like the UAE have renounced acquiring sensitive nuclear fuel cycle technologies like uranium enrichment and spent fuel reprocessing that build capabilities useful to weapons. Saudi Arabia is reluctant to do so, especially since Iran can still enrich uranium, even if only to low levels.

Then just last week, a bipartisan group of former national security officials and nonproliferation experts, including eminent figures such as Dr. Sig Hecker, Ambassador Linton Brooks and Dr. Pete Lyons, submitted a letter to Congress on this issue. They argued that, for national security reasons, it is in our best interests to have a nuclear cooperation agreement with Saudi Arabia, even if it does not contain the same enrichment and reprocessing prohibitions found in the 2009 agreement with the United Arab Emirates.

Hanging over the issue is the Nuclear Deal between Iran and the United States, Great Britain, France, Germany, China and Russia, known as the P5+1 Group, negotiated in 2015. This Deal has been a general success but has led to a shift in regional tensions.

The Saudis were never as concerned with Iran’s nuclear ambitions as they’ve been with what they see as Iran’s regional goal of hegemony and their use of terrorism and subversion to achieve it. Iran’s role in the civil wars in Yemen and Syrian are exactly the thing Riyadh was worried about, not a nuclear bomb.

Since the Iran Nuclear Deal never dealt with these other problems, the Saudis feel that the Deal makes the situation worse. Lifting sanctions against Iran removed Iran’s status as a rogue state and gave it more income and legitimacy to meddle in regional conflicts. Our destruction of Iraq, and its spawning of ISIS, just helped Iran become a bigger problem.

Enter Donald Trump. In theory, Mr. Trump is well-suited to push the Saudis to accept our standards of nonproliferation and adherence to strict limits on nuclear technology. He can reaffirm Saudi Arabia’s position under our nuclear umbrella. He can argue that it makes more sense for Riyadh to buy enriched fuels for the reactors from the lower-cost foreign suppliers in the Nuclear Suppliers Group than it is to produce it in Saudi Arabia.

Any such agreement would strengthen our relationship with the Kingdom.

But there are questions about what limits the Trump administration would require, and what the Saudis would accept, as part of any agreement.

Insisting on strict conditions could force the Saudis to buy from Russia or China instead, which don’t impose the same rules, or from France or South Korea.

However, a failure to incorporate crucial restrictions in any deal would leave the Saudis free to repurpose some of the technology for nuclear weapons. That would undercut decades of American-led efforts to prevent exactly this problem.

But then, continued adherence to the Iran Nuclear Deal is the obvious test of whether we’ll undercut decades of American leadership.

This is a text book example of the intersection of science and society, but if the Saudis get nuclear, it would be better if it was with us.