The U.S. and China relationship remains tense. The global devastation of Covid-19 provided a flashpoint for recriminations as countries quarrel about who should have done more. Geopolitical risks rise further as Americans go to the polls in November and China’s President, Xi Jinping, aims to sustain nationalism as the economy recovers from the pandemic.

Technology independence remains a central concern. The U.S. has countered China’s long-brewing sovereignty claims with assertive technology demands, urging peers to boycott Huawei, banning popular Chinese apps and increasing transparency for U.S. listed Chinese companies. Surprisingly, the markets remain complacent. Seeming to ignore the threat of a bifurcation of global technology, and an estimated $3.5 trillion cost to the global information and technology sector over the next five years. So, what can investors anticipate in the fallout of the looming tech divide?

This expanding confrontation could accelerate a bifurcation of global technology. Two global standards would entail competing internets, satellite and telecom networks, hardware and operating systems. For manufacturers and services operating globally, this would mean supporting both standards, and eliminating some economies of scale. In a hard break, there may be very little operability between the two. Further, it would reduce cross border investment, immigration and innovation.

However, neither side is willing to relent. The U.S. cites national security concerns to rationalize moves against Huawei and other Chinese technology players. Meanwhile, China has been unable to mitigate fears that big tech is independent from the state. As the odds of a complete tech divide become more likely, other countries urge some cooperation. America’s European allies feel the risks can be managed by excluding foreign suppliers from the most sensitive parts of a network and thoroughly vetting installations. But the U.S. is adamant there is no middle ground.

Apjit Walia, Global Head of Technology at Deutsche Bank, estimates that an all-out technology decoupling could cost the global information and communications technology sector over $3.5 trillion over five years. This staggering sum represents the loss of Chinese demand to Western companies, supply chain disruptions and the additional cost of adjusting to a world with rival standards. Approximately 60% of the overall hit would result from losing access to China’s market.

The cost is likely to be higher, as this estimate does not account for the countries that would align with China. Most Belt and Road partners would likely side with China, and Africa seems committed, as 80% of the continent is already powered by Huawei’s 4G network. The challenges for these regions to abandon Chinese technology are material: The complexity of Chinese supply chains, built over decades, would be costly to shift and reconfigure elsewhere. That transition could take 5-8 years. The lack of skilled labor and infrastructure in other locations is another major obstacle. Even as Chinese wages rise, superior productivity has been hard to match.

As noted already, there is the cost of a bifurcated world with two global standards. Decreasing economies of scale and any loss of operability between the two would be a headwind for global manufacturers.

Semiconductors provide a prominent example of how the tech divide can hurt overall tech development. Currently, the U.S. dominates semiconductor development. Last year it accounted for close to half of global sales, with China a modest 5% by comparison. 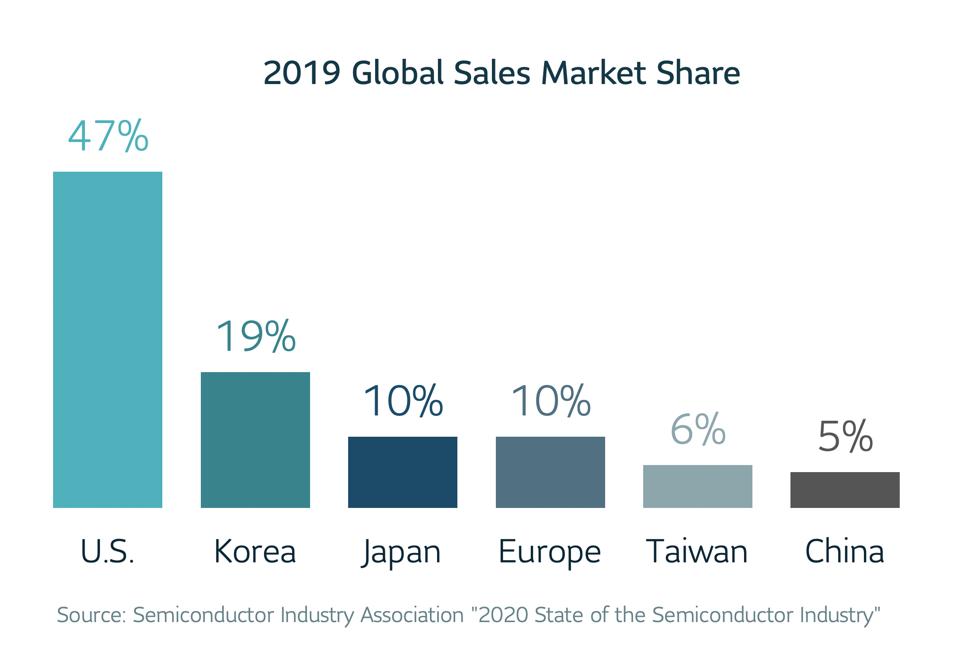 China’s capabilities are not sophisticated enough yet and are estimated to be four years behind. In technology years, that’s a generation. Although they intend to spend over $1.5 trillion over the next decade in semiconductor development, it will take time to catch up. Currently, they import over $300 billion of microchips.

While efforts from the last decade show promise, China is still well behind exacting the design and production standards needed to drive the explosion in 5G technology it hopes to lead. 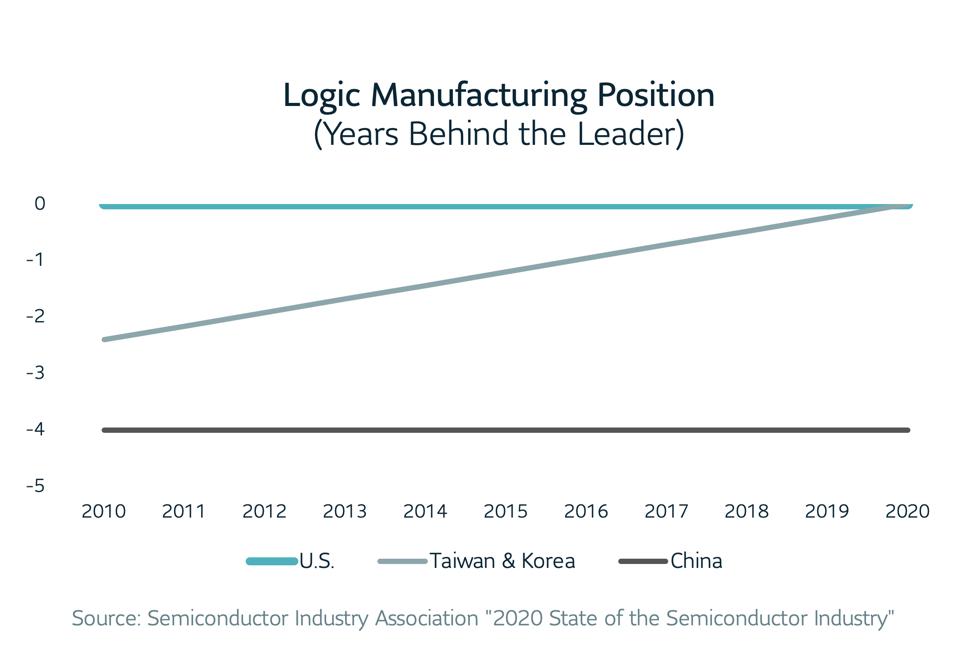 The most recent U.S. restriction on Huawei prevents any global vendor from supplying it with chips made from U.S. design equipment. That crosses a lot of the world. For example, the two largest Taiwanese chip manufacturers — Taiwan Semiconductor Manufacturing Company (TSMC) and MediaTek — can’t supply Huawei. This leaves Huawei severely handicapped once it depletes current inventories. It also slows the overall advancement of technology, which could be a detriment to both China and the U.S.

The technology landscape is quickly shifting, and global markets may not be as open or lucrative as in the past. However, they appear to be remarkably complacent. While stunting the growth of Huawei, a global technology champion, seems provocative, China has not retaliated. For now, U.S. markets appear to be shrugging it off while Taiwanese semiconductor manufacturers seem more vulnerable. 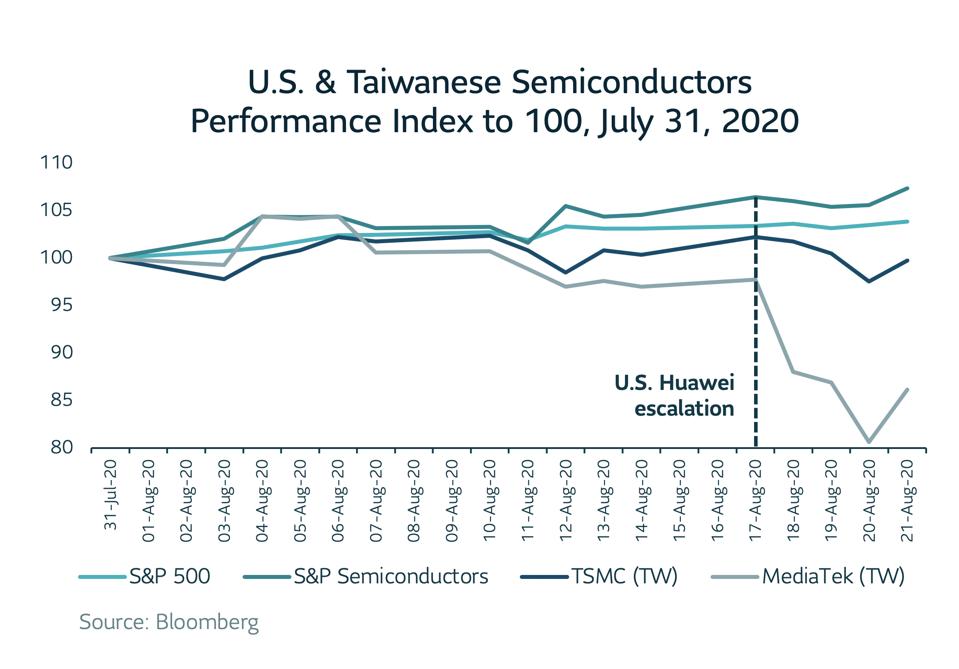 When the U.S. announced its actions against Huawei, MediaTek’s stock dropped 18% and recovered a little as the U.S. clarified some details. As a large wireless chip supplier, Huawei misfortunes could devastate it.

So, markets should anticipate that there will undoubtedly be winners and losers. One overlooked development is that governments may start to more aggressively back their own national champions.

For instance, the U.S. Congress is close to approving a 5-10 year investment program to push semiconductor research and onshore manufacturing to the next level. This may be one reason U.S. semiconductor stocks have been calm given tensions with Huawei.

Certainly, national security sensitivities are hard to ignore if citizen’s data is stored in foreign databases. The reach and sophistication of technology is raising serious sovereign and privacy issues not just for the U.S. and China but for all countries.

Markets need to more effectively weigh these factors. Technology bifurcation doesn’t mean the U.S. and China can’t wall off tech but still trade and cooperate on connected interests. After all, today China has had its own version of the internet, GPS standards and wireless operating systems. However, it appears technology companies are close to peak globalization but markets are ignoring this and the related fallout of a push to more technology independence.

This material contains opinions of the author, but not necessarily those of Sun Life or its subsidiaries and/or affiliates.

This article was written by Randy Brown from Forbes and was legally licensed through the Industry Dive publisher network. Please direct all licensing questions to legal@industrydive.com.