Is Climate Change's Most Dreadful Impact Really Decades Away?

Is Climate Change's Most Dreadful Impact Really Decades Away?

The Trump administration’s position on climate change is evolving — from it being a “hoax” to it being a real problem 50-75 years out. That view runs counter to that of the Democrats, who want the federal government to take charge and to mitigate the potential damages — before it is too late. The 2020 election will decide the country’s direction on this issue.

Environmental Protection Agency Administrator Andrew Wheeler does not deny the existence of human-caused climate change, although he does say that more urgent ecological problems such as clean drinking water are now on his radar. At the same time, he points out that the United States has reduced its CO2 releases by 13% since 2005, outpacing other industrialized nations.

Climate change, he adds in a CBS televised interview, is “an important issue we have to be addressing and we are addressing.” But Wheeler goes on to call Democratic proposals “dangerous for the economy and national security.”

His statements are partisan and downplay concerns tied to the planet overheating and leading to melting ice caps, rising sea levels and even crazier weather patterns. Wheeler’s boss routinely mocks climate change. Indeed, as a real estate developer, Donald Trump has battled environmental regulators at the federal and state levels over everything from the cost of environmental impact statements to trying to get public dollars to repair damages his businesses have created.

During the 2016 presidential campaign, Trump said on Twitter that climate change was a “hoax.” And as president, he has tried to rollback the Obama administration’s Clean Power Plan that would cut CO2 releases by 32% by 2032 — the same administration that ushered in the New Energy Economy that led to the emergence of green technologies and the rise of natural gas. Trump has also withdrawn from the voluntary Paris climate agreement that tries to limit temperature increases to 3.5 degrees Fahrenheit by mid century.

Those moves contradict the findings of the Intergovernmental Panel on Climate Change, which says that the time is fast approaching to take meaningful action: it notes that within 12 years, it will be too late to reverse the trajectory. Thirteen U.S. government agencies agreed with those same findings. And therein is the premise behind the Green New Deal — to act now to avert the worst possible environmental catastrophes. The practical questions for those who agree with such findings are just how much they are willing to spend and over what time frame.

“I believe very strongly that defeating climate change and building clean energy must be the No. 1 job in the United States, because if it’s not job No. 1, it won’t get done,” Washington Gov. Jay Inslee told a crowd gathered for the Renewable Energy Policy Forum, as quoted in The Hill. “I think the Green New Deal has been helpful in that it started the discussion.” Inslee is running for U.S. president. 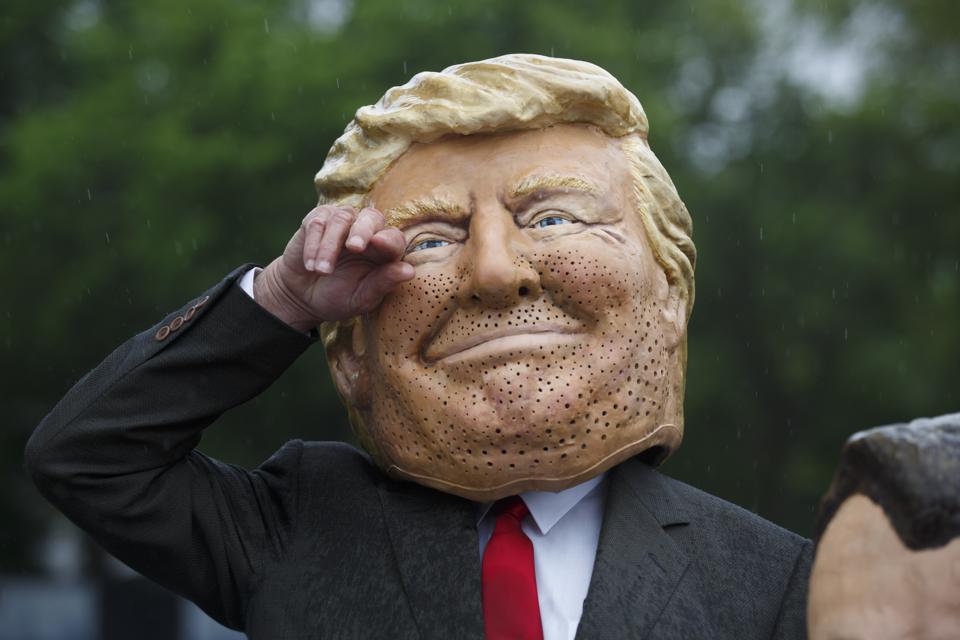 An activist wears a mask in the likeness of U.S. President Donald Trump during a protest ahead of the Group of Seven (G7) Leaders’ Summit in Quebec City, Montreal, Canada, on Thursday, June 7, 2018. From steel tariffs to Iran sanctions and climate change, Trump will find himself isolated from other Group of Seven leaders at the summit in Quebec. The meetings on Friday and Saturday will be the first opportunity for America’s closest allies to express their frustration in face-to-face meetings with Trump after he imposed steel and aluminum tariffs last week. Photographer: Cole Burston/Bloomberg

To be clear, the oil and coal sectors helped build this country and they have helped industrialize much of the world. And they will remain vital. But they are no longer exclusive to economic progress. Today, renewables including hydropower make up about about 17% of the U.S. energy mix. And electric cars are gaining market share and they have to potential to overtake the internal combustion engine. While some politicians are stuck in the 1950s, American enterprise has moved on.

U.S. businesses have already procured nearly 4,000 megawatts of utility-scale wind and solar capacity, which breaks 2015′s numbers by nearly 750 MW. Collectively, they have bought 13,000 MW of green power. The goal is 60,000 MW by 2025, says the Wind Solar Alliance. The most progressive enterprises include Microsoft Corp., Intel Corp., Google, Apple and Bank of America.

Yet, Trump has vested himself with the oil and coal industries while he continues to deride the wind and solar sectors. Consider that a federal judge just invalidated federal leases for oil and gas drilling on 300,000 acres of public lands in Wyoming, ruling that the government must consider the impact that such development would have on climate change. It’s especially noteworthy given the current White House’s efforts to expand drilling and mining on public properties.

A news clip is, furthermore, making the rounds on social media that shows the president telling an audience it should plan to turn off the TV if the wind stops blowing. The remark highlights what an ignoramus Trump actually is; fast-reacting natural gas generation is specifically designed to kick on when the weather does not permit, allowing for the growth of wind and solar energies.

“There are more renewables coming onto the grid and we will see more flexible natural gas plants — those that can turn up-and-down at a much faster rate,” says Amit Kulkarni, general manager for product management at GE Power. GE says that renewables will comprise 61% of all its new power plant installations through 2026. 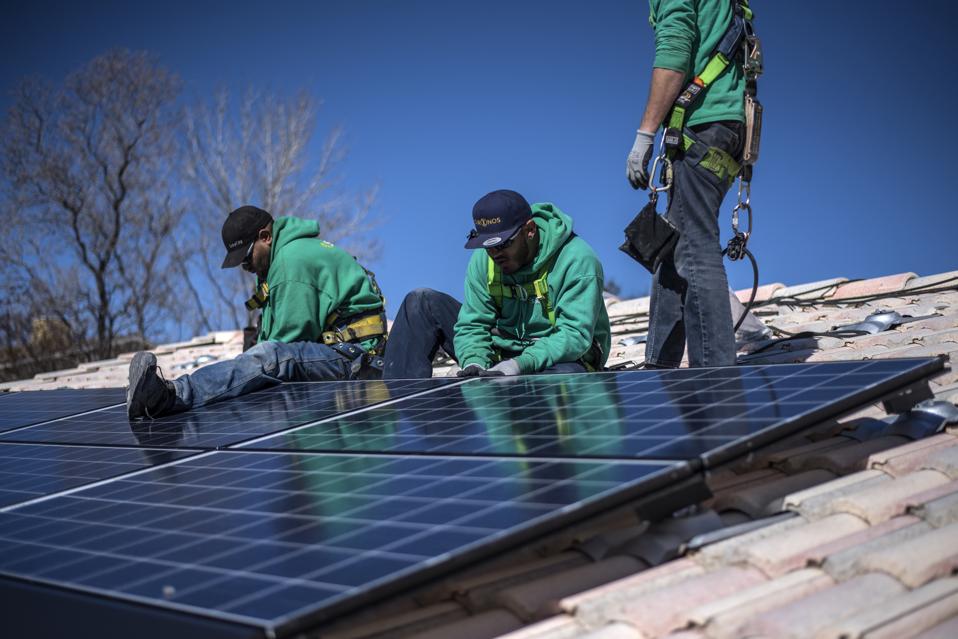 The context here is that a new report by Energy Innovation found that 74% of the current coal fleet in the United States is providing electricity that is more expensive than what wind and solar could offer. And within six years — as renewable technologies improve and prices drop — 86% of the coal fleet will be outmatched.

Bloomberg New Energy Finance reached similar conclusions, saying that wind and solar electricity will make up 50% of the world’s energy mix by 2050. The policy analysts go on to say that natural gas will get used mostly to firm up intermittent wind and solar energies. Meantime, the International Energy Agency’s outlook has renewable energy growing from a quarter of the globe’s electricity mix today to 40% by 2040.

“Due to the rapid recent cost decline of wind and solar, the combined fuel, maintenance, and other going-forward costs of coal-fired power from many existing coal plants is now more expensive than the all-in costs of new wind or solar projects,” the Energy Innovation report says. “This cost crossover raises substantial questions for regulators and utilities as to why these coal plants should keep running instead of new renewable power plants.”

The gales of the free market are blowing. But it is clear that those forces won’t create an energy line-up with 100% renewables by 2030, as prescribed by the Green New Deal. Even the most ambitious states — Hawaii, California, New York, New Mexico and Puerto Rico — won’t complete their transitions until 2045, and 50% by 2030. New Mexico, which is part of the U.S. Climate Alliance that seeks to be in compliance with the Paris agreement, calls its Energy Transition Act a “promise to future generations.”

The common link shared among those jurisdictions is that they are using the public levers to facilitate newer, better and cheaper technologies to achieve their aims. That includes everything from smart grids that get more green electrons over the wires to demand response programs that shift peak energy usage to battery storage that injects electricity onto the grid when the weather doesn’t permit.

President Obama’s investments in the New Energy Economy started the movement. A scaled-down version of the Green New Deal would catapult it. In 2020, the people will decide the country’s long-term focus — not the current president or other politicians who are concerned mostly about the next election cycle.

This article was written by Ken Silverstein from Forbes and was legally licensed through the NewsCred publisher network. Please direct all licensing questions to legal@newscred.com.

tags: climate change Donald Trump featured
previous In The Age Of AI, The Human Factor Still Matters For Cybersecurity
next Egypt Mediators In Gaza For Talks With Hamas
Related Posts