Home Global News US Marines Send F-35 Fighters To South Korea – And A Signal To The North
Global News
March 31, 2017

The Pentagon revealed this week that U.S. Marine Corps F-35 fighters are operating in South Korea for the first time, as they participate in joint training exercises with the Republic of Korea’s military. The eight planes are from a squadron of F-35Bs deployed to Iwakuni, Japan in January, where they will be permanently stationed and on call to respond quickly if a crisis occurs on the Korean Peninsula.

And therein lies a bigger story than the ongoing training exercise in which allied forces are practicing how to operate together in wartime. F-35B, the Marine variant of the tri-service fighter, isn’t just the world’s first supersonic tactical aircraft capable of taking off and landing vertically, it is also invisible to radar. That’s what being stealthy means — the enemy can’t see you, but you can see them.

When you combine the vertical agility and invisibility of the Marine Corps’ latest fighter with the fused data from diverse sensors and the ability to share information securely among all fighters on a mission, what you have is a plane that can operate pretty much anywhere. Including over North Korea. So although U.S. Pacific Command is at pains to describe the training exercise as a routine annual event intended to provoke no one, the F-35′s presence is sending a powerful message to the mercurial leader of North Korea. 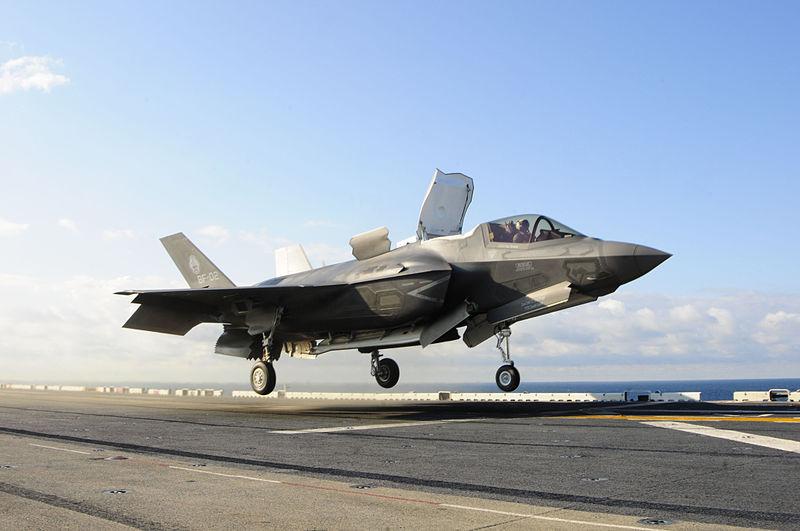 A Marine F-35B fighter lifts off from the deck of the amphibious assault ship USS Wasp. The open hatch behind the cockpit enables air to flow through a mid-fuselage lift fan; that plus downward-vectored engine nozzles at the rear give the plane vertical lift so it can land pretty much anywhere.

Kim Jong Un seldom misses an opportunity to threaten the South, and has repeatedly said his country seeks to develop long-range ballistic missiles capable of hitting America with nuclear warheads. That was the cheery message he delivered in his New Year’s Day address in January. But now he is getting a similarly cheery message in response: South Korea and its U.S. ally are acquiring an aircraft that can strike any target in North Korea with pinpoint accuracy, and chances are Kim won’t even know it’s coming.

So whether intended or not, the message that the unpredictable Mr. Kim is getting is, “step out of line, and you’re done.”  This isn’t just about the handful of Marine F-35s participating in the current exercise. The Marines will be increasing the number of stealthy fighters in the region as the year goes on. Then the U.S. Air Force will begin deploying its own version of the F-35 to local bases. Then the U.S. Navy will begin operating F-35s off aircraft carriers in Korea’s littoral seas.

And let’s not forget that Japan and South Korea will begin receiving F-35s in the near future. Both countries decided the plane was their best option for modernizing Cold War fighter fleets. South Korea is planning to acquire 40 of the Air Force variants between 2018 and 2021. Put this all together, and you have a potent deterrent to aggressive behavior by the North. Dictator Kim might doubt U.S. willingness to use nuclear weapons in a crisis, but there’s no question it will use F-35s in a broader campaign to wipe out Kim’s military.

The F-35B operated by the Marine Corps — it is also being bought by Britain and Italy — is a uniquely versatile tactical aircraft that integrates a “lift fan” behind the cockpit and downward swiveling engine nozzles so that it can ascend or descend vertically. It therefore does not require a landing strip and can operate wherever it is needed in a war zone. F-35B is part of a Marine warfighting vision including the MV-22 Osprey tiltrotor and CH-53K Super Stallion helicopter that frees U.S. forces from dependence on vulnerable land bases.

So if North Korea were to initiate military action by targeting local bases, that wouldn’t preclude a quick response. The aviators who are an integral part of every Marine Air-Ground Task Force are trained to operate from ships offshore or from austere forward locations. They can strike targets or insert forces anywhere on short notice, and that includes taking action against the sites where Pyongyang conducts its missile launches. The precision munitions carried on each F-35 are more than capable of destroying launch sites within minutes.

Of course, that is not what the Marines have been practicing for over the last few weeks. They have been conducting “close air support,” which involves careful coordination of air elements and ground troops operating near hostile forces. This kind of training hones the skills of U.S. and South Korean allies so that they can mesh seamlessly in a real military operation. The vertical agility, stealth and situational awareness of F-35B makes it potentially the most effective close air support aircraft in history.

Former naval aviator Senator John McCain acknowledged that prospect when he welcomed the first Marine F-35s to Arizona’s Marine training center at Yuma in 2012, observing the new fighter, “may be the greatest combat aircraft in the history of the world.” It certainly is the most versatile. If you are sitting in Pyongyang evaluating future military options, you have to be wondering what it would be like to face a force of hostile aircraft that you can’t see which could target you highest-value military assets on short notice.

Even the bellicose Mr. Kim should be able to see the dangers of provoking such a confrontation.

Several of the companies building the F-35 including prime contractor Lockheed Martin are contributors to my think tank and/or consulting clients.