Home Global News The Most Corrupt Countries In The World The Most Corrupt Countries In The World

The Most Corrupt Countries In The World

Sometimes, corruption can be carried out with a smile.

Sippi Azarbaijani-Moghaddam, an independent consultant, relays a story she was recently told by a police chief in Afghanistan who was keen to see just how much bribery was going on in his country. He instructed one of his policemen to dress as a normal Afghan man and drive from Zabul province in the southeast to the capital Kabul to see how much he would be asked for in bribes.

“The police sure enough asked him for lots of bribes,” she told a recent meeting at the Chatham House think-tank in London. “He ended up paying a lot of money. And in the middle of all of this he was stopped at a Taliban checkpoint where they asked him to pay. And he said the guy was extremely polite and apologetic for getting this money. He gave him a receipt which clearly said the amount and there’s a phone number so you can call the Taliban and complain if you think you’ve been overcharged.”

Afghanistan is one of the most corrupt countries on earth. It is ranked 172 out of 180 countries in the Corruption Perceptions Index, released by Transparency International in late January, a ranking that would surprise few Afghans. Another recent survey carried out by The Asia Foundation found that 70.6% of Afghans say corruption is a “major problem” in their daily life and 81.5% say it is a major problem for the country as a whole.

While Afghanistan may be a particularly bad case, the reality is that corrption is debilitating for economies around the world. In September, UN secretary general António Guterres told the Security Council that corruption costs at least $2.6 trillion a year, equivalent to 5% of global GDP. He also cited figures from the World Bank which show that businesses and individuals pay more than $1 trillion in bribes every year.

Unfortunately, it is a problem that seems to be getting worse rather than better.

The index ranks countries according to the perceived levels of corruption in their public sectors, based on the views of experts and business people. It runs on a scale of zero to 100, with zero being highly corrupt and 100 very clean. More than two-thirds of countries score below 50 points and the average score overall is just 43. The worst-ranking country, Somalia, has just 10 points.

It is not all bad news. The countries showing the greatest improvement over the past year include Oman (which gained 8 points and 37 places), Gambia (which improved by 7 points) and the Seychelles (up 6 points). On the other hand, those that declined most included Azerbaijan (which lost 6 points and 30 places), Burundi (down 5 points) and the U.S. and Bolivia (which both lost 4 points, leaving them ranked at 22 and 132 respectively).

The top of the rankings is dominated by rich, European countries such as Denmark, Finland and Switzerland, along with other developed economies including New Zealand, Singapore and Canada.

What makes a country corrupt?

At the other end of the scale, some regions stand out as being particularly bad. Of the bottom ten countries, six are either in the Middle East or close by, while others comes from troubled areas of west and central Africa. A common factor among many of these countries is civil unrest and, in some cases, outright warfare.

Bottom of the pile is Somalia, which has been wracked by political instability and warfare since 2009. Just above that is Syria and South Sudan, in equal 178th place – these countries have been suffering brutal civil wars since 2011 and 2013 respectively.

Among the other countries towards the bottom of the league table are Iraq (168th), Libya (170th), Afghanistan and Sudan (=172nd) and Yemen (176th). Other low-ranked countries include Equatorial Guinea (whose ruling elite have gained a reputation for corruption on a grand scale) and Guinea Bissau (also =172nd).

Overall, Sub-Saharan Africa is the worst performing region, with its countries averaging just 32 points out of 100. It is followed by Eastern Europe and Central Asia (with an average score of 35 points) and the Middle East and North Africa (39 points). Things are slightly better in the Americas and the Asia Pacific regions (both have an average score of 44). The best performing region by some distance is Western Europe where the average score is 68 points out of a possible 100.

Those differences indicate an important point about the prevalence of corruption, which is that there appears to be a close link between the level of fraud and bribery in a country and the political system it has.

“Our research makes a clear link between having a healthy democracy and successfully fighting public sector corruption,” said Delia Ferreira Rubio, chair of Transparency International, in the report. “Corruption is much more likely to flourish where democratic foundations are weak and, as we have seen in many countries, where undemocratic and populist politicians can use it to their advantage.”

In many cases, corruption and the absence of political accountability tend to feed off each other. According to Transparency International managing director Patricia Moreira, “Corruption chips away at democracy to produce a vicious cycle, where corruption undermines democratic institutions and, in turn, weak institutions are less able to control corruption.” 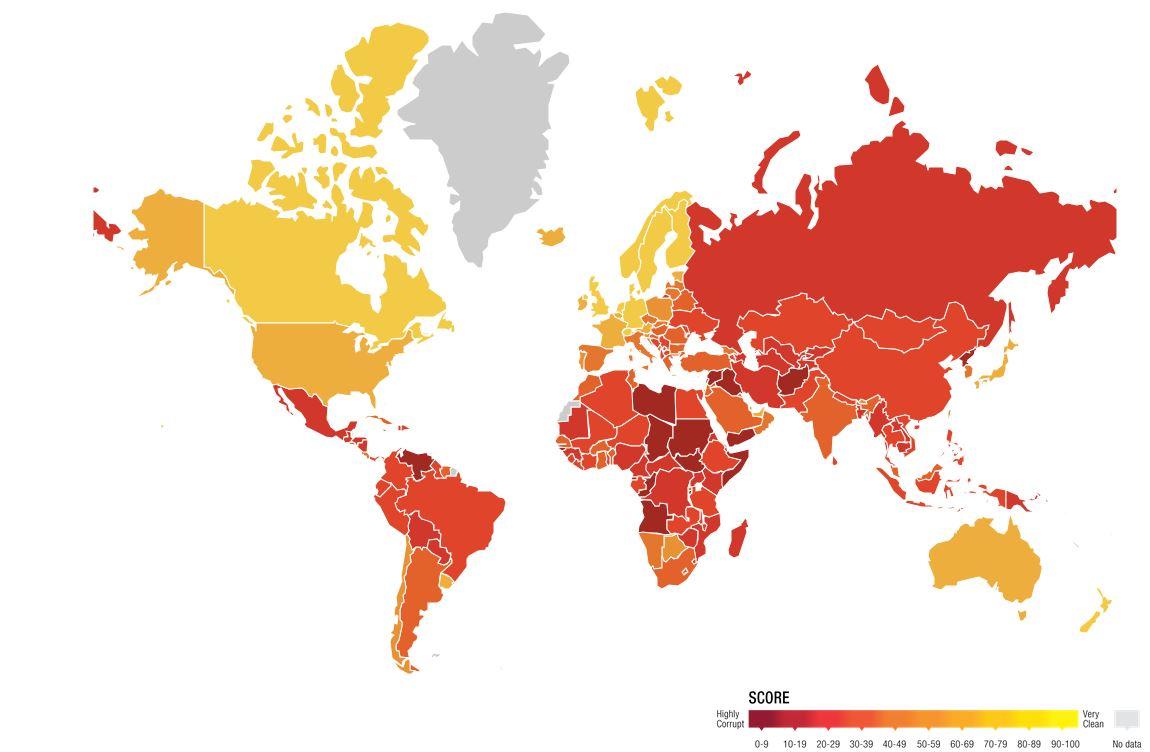 tags: Corruption featured
previous Why Human Rights Must Be Raised At A Second Summit With North Korea
next A New and Useful Solution to a Massive US Drug Problem
Related Posts