Since the Sept. 11, 2001, terrorist attacks, federal and state officials have repeatedly expressed concern about a possible attack on a passenger ferry.

The New Jersey Office of Homeland Security and Preparedness said last November that its review had found ferries “remain susceptible to terrorist attacks because they transport large volumes of people, have limited security and offer minimal escape options during incidents.” The office particularly pointed out the ferries between New Jersey and New York, which carry about nine million passengers annually.

That’s why I — a journalist who specialized in transportation security and safety for 27 years at USA Today and Condé Nast Traveler — was concerned about the lack of security I saw when I boarded a 172-foot ferry, the Lt. Samuel S. Coursen, in Lower Manhattan recently for a seven-minute trip to Governors Island.

There were no uniformed New York City Police Department officers, no magnetometers and no handheld metal detectors or X-ray devices as hundreds of passengers boarded the ferry at the Battery Marine Terminal. Passengers without bags proceeded to the ferry without a search while a cursory check of other passengers’ belongings was done by a single non-uniformed worker.

A few New York City police officers were near the dock on arrival at Governors Island. On the return trip to Manhattan, passengers boarded the ferry without showing a ticket, and there were no inspections of passengers’ bags or belongings. With Governors Island about 400 yards from Brooklyn, 800 yards from Manhattan and less than two miles from New Jersey, wouldn’t it be possible for a perpetrator to kayak, canoe or boat to the island and board the ferry?

Sarah Krautheim, a spokeswoman for the Trust for Governors Island, the New York City agency that operates the ferry and has developed the island into an attractive destination for locals and tourists, said that the “safety and security of our visitors is the trust’s No. 1 priority.”

The trust contracts its own uniformed security staff at the Battery Marine Terminal, and the New York City Police Department assigns uniformed officers to Governors Island, she said.

All passengers and their belongings are screened “in accordance with the vessel and facility security plans that are regulated, approved and inspected” by the U.S. Coast Guard, Krautheim said. “These plans account for the various means of access to the island, and the security procedures within those plans are sensitive in nature, so I am unable to share in detail.”

The trust’s contracted security staff is “trained in proper passenger and vehicle screening protocols, Krautheim said. “Passengers do not get past the ticket attendants and our security team without purchasing a ticket, showing a Governors Island employee ID or being on our security list.”

Passengers are not screened on the return trip to Manhattan from Governors Island because they were screened earlier on the trip to Governors Island, she said. “Being that our vessels are the only way on and off the island, we maintain control over those who travel on and off, as well as goods that are brought on and off.”

The New York City Police Department did not respond to questions about ferry security.

According to Steven Emerson, the author of “Jihad Incorporated: A Guide to Militant Islam in the U.S.,” the FBI noted in a July 2003 memo that ferries are attractive to terrorists because many operate in close proximity to oil terminals, tourist facilities and places of commerce.

The terrorist group Al Qaeda is “believed to be interested in using a suicide bomber to destroy a ferry,” said Emerson, who is also executive director of the Investigative Project, which says it maintains the largest nongovernmental data and intelligence library in the world on militant Islam.

In February 2004, Abu Sayyaf, a group linked to Al Qaeda, detonated a bomb on a ferry in the Philippines, killing 116 people.

Ferries are “a vulnerable target,” the New Jersey Office of Homeland Security and Preparedness said in its review last November. “Unlike airports, ferry terminals do not have identification requirements, and those permitted onboard with baggage — and, in some cases, vehicles — do not undergo similar physical screening procedures.”

The office said that “although there has not been a recent plot or attack against ferries in the United States, authorities across the country, including in New Jersey, have increased security in this area.”

A December 2010 report by the federal Government Accountability Office said that many of the Coast Guard, ferry system and law enforcement officials who spoke with GAO investigators “generally believe ferries are vulnerable to passenger- or vehicle-borne improvised explosive devices.” Coast Guard officials told the GAO that the relative risk to ferries is increasing.

In December 2015, following a terror attack that killed 14 people and seriously injured 22 others at a holiday party of county workers in San Bernardino, Calif., New York Governor Andrew Cuomo signed a 30-day executive order to upgrade security by giving New Jersey and Connecticut law enforcement officers jurisdiction over ferries, trains and buses connecting to New York. The order said, “While there is no known confirmed threat to the N.Y. metropolitan area, transportation systems have been repeatedly targeted by terrorists.”

Concerned about possible terrorism, the Coast Guard periodically accompanies the Staten Island Ferry, which travels to and from Lower Manhattan, according to silive.com, an online newspaper covering Staten Island.

Besides protecting the marine transportation system from terrorism, the Coast Guard is responsible for keeping passengers safe on ferries by ensuring ferry operators meet safety regulations. 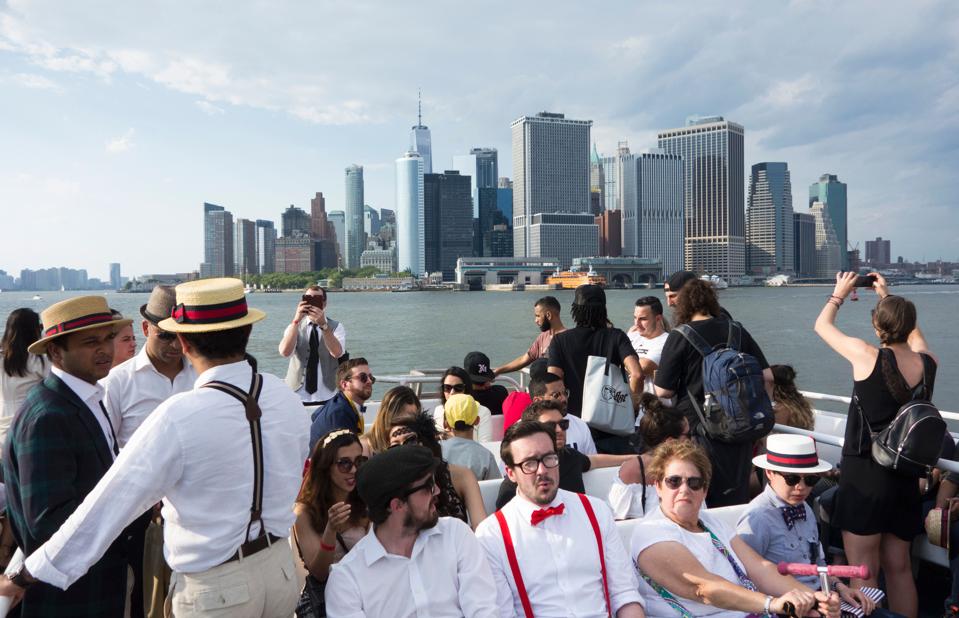 Partiers return to Manhattan from Governors Island by ferry after a Jazz Age Lawn Party on June 10. (Don Emmert/AFP/Getty Images)

When the Lt. Samuel S. Coursen left the docks in Lower Manhattan and Governors Island on my recent trips, there were no Coast Guard-required safety announcements explaining where the life jackets were located and other instructions for an emergency situation.

Krautheim said that it’s “standard practice” to play a safety briefing for ferry passengers but that there have been “rare occasions” when the crew “may have failed to play the briefing.”

Such briefings are not required for voyages under 15 minutes, she said.

So I checked with the Coast Guard and its spokesperson, Chief Warrant Officer Allyson Conroy. Conroy said some smaller passenger boats on short voyages in New York Harbor can receive a waiver to forego the safety announcement over a public-address system and instead post safety placards or give a verbal safety briefing. However, such a waiver cannot be obtained for the Lt. Samuel S. Coursen, she said.

That ferry has a capacity of 1,250 people, and vessels with a capacity of 1,000 or more “are required to have a public-address system that clearly states passenger safety announcements,” Conroy said.

After I relayed the Coast Guard’s comments to Krautheim, she said that the boat’s audio player might have failed and that it “has since been updated.”

Krautheim said she apologized “if anything you experienced throughout your visit caused you to feel unsafe or uncomfortable at any time.”

This article was written by Gary Stoller from Forbes and was legally licensed through the NewsCred publisher network. Please direct all licensing questions to legal@newscred.com.