Home Russia Russia's Whole Economy Is Based On Worst-Case Scenarios Russia's Whole Economy Is Based On Worst-Case Scenarios

Russia's Whole Economy Is Based On Worst-Case Scenarios

Bring it on, says Russia’s central bank. They are ready for it. In fact, Russia’s entire economy since sanctions against it began in 2014 has been based on worst-case scenarios. The only scenario that could be even more negative would be a war—that is how dire Russia views its outlook when considering unpredictable external factors like Brussels and Washington sanctions.

The Central Bank’s Deputy Chairwoman Ksenia Yudaeva told Reuters in an article published yesterday that “We are also considering all risk scenarios, including a reduction in the price of oil to $35 per barrel and more sanctions,” the MIT graduate said. 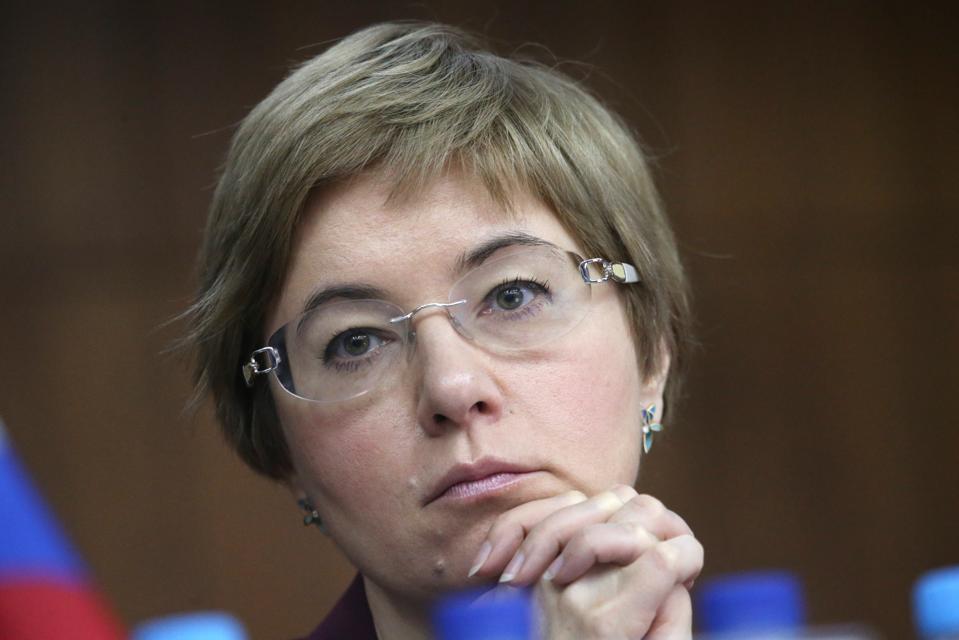 Ksenia Yudaeva, first deputy governor of the Central Bank of Russia: preparing for the worst, always. (Photo by Stanislav KrasilnikovTASS via Getty Images)

Russia stocks as measured by the VanEck Russia ETF are down over 4% year-to-date. But thanks to rising oil, Russian equities have beaten the MSCI Emerging Markets Index, which is down over 15.7% thanks in large part to China and Brazil. Russia’s stock market is up 4% over the last six months in dollar terms while the benchmark MSCI Emerging Markets is an underperformer. Russia is basically pegged to the fortunes of oil.

Consumer sentiment, meanwhile, is on the decline. 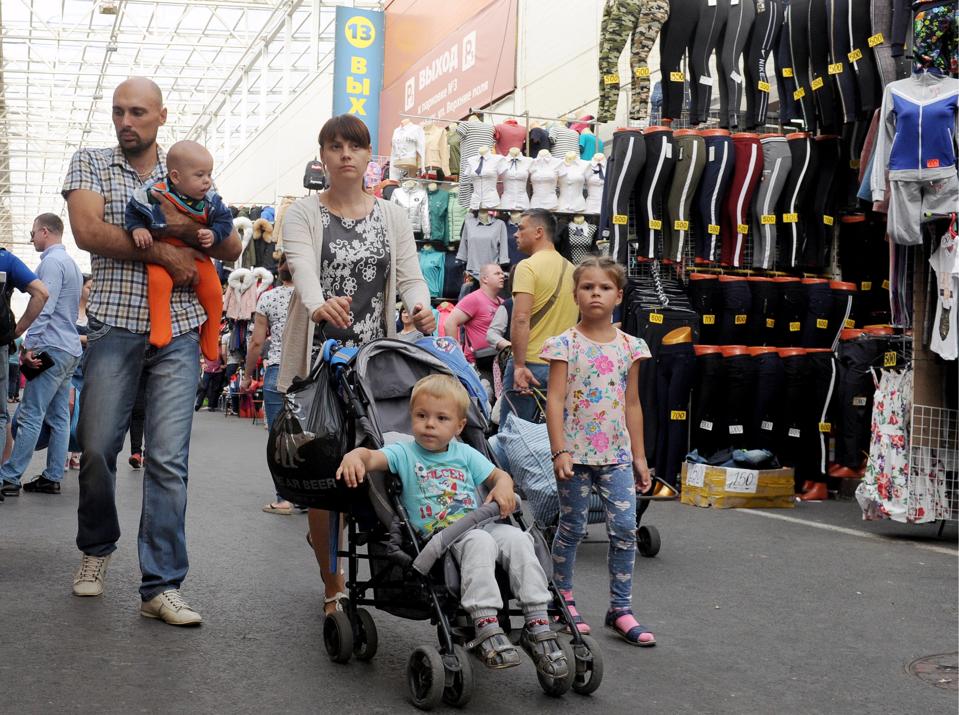 Customers at the Sadovod Shopping Center in Moscow. Consumer confidence is in decline. (Photo by Viktor DrachevTASS via Getty Images)

Taxes are on the rise and consumer demand is seen declining significantly, putting GDP growth to start the year off at less than 1%. Pension reform plans have also hurt consumers, at least in sentiment.

Consumer confidence fell by 6 percentage points to minus 14% in July-September, according to Rosstat. The percentage of Russians expecting positive changes in the coming year decreased from 25% to 16%, while negative expectations rose from 20% to 32%. The share of those who approve of changes in the economy decreased from 19% to 14%, and those who were negative on higher taxes and entitlement reform rose from 31 to 40%.

The U.S. has threatened more sanctions against Russia, but it is hard to see where they would come from next. Lawyers for different oligarchs have been bantering around Washington trying to convince congressional leaders to sanction their rivals, but the Trump administration has largely taken to imposing individual sanctions against big, brand name Russians like Oleg Deripaska. His assets in the U.S. are now frozen. He is also not welcome to travel here.

Some have argued that Russia is being pressured to give up on the West. And if this were the case, then Russia should just give up on the dollar. The other currency of choice would be the euro. 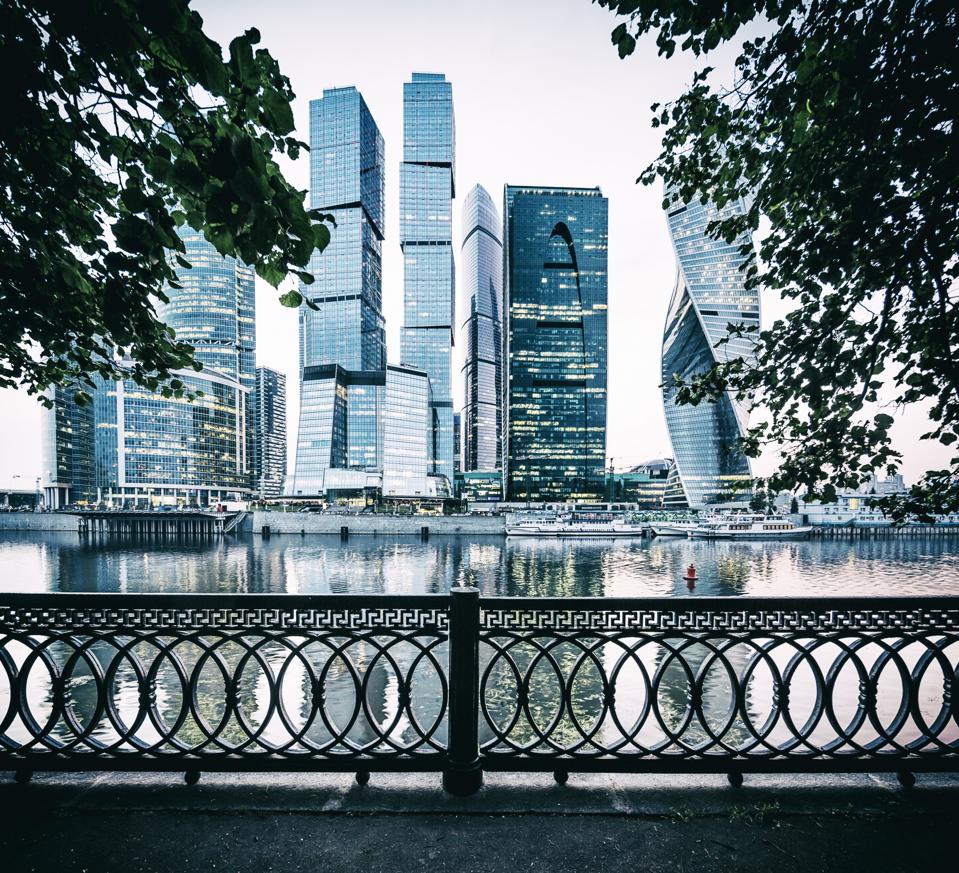 Moscow International Business Center, also known as Moscow City. The stock market has outperformed the MSCI Emerging Markets Index year-to-date thanks to rising oil prices. (Getty Images)
VTB Bank President Andrei Kostin said last week that the idea of completely abandoning the use of the dollar in Russia was a “utopian” fantasy.

“Let’s get away from the dollar? Of course not. It’s impossible to do,” he told Interfax on October 5. “This is utopian, and I am a realist,” he said. Kostin said he does not think the Kremlin would ever prohibit the use of dollars.

If Russia’s use of dollars were restricted by the Treasury Department, an unlikely move and one that would target only certain entities, Kostin said Russian companies are currently limiting settlements in dollars. Five years ago, the share of ruble trade with India was 3% and is now at 20%, Kostin said.

For now, Russia is off the hot seat. Vice President Mike Pence blamed China last week for election meddling, rather than the Russians. You could hear Putin breathe a sigh of relief from here.