Home Global News Thanks To North Korea, Nuclear Bunkers Are Making A Comeback – But How Effective Are They?
Global News
Opinion
October 13, 2017

Thanks To North Korea, Nuclear Bunkers Are Making A Comeback – But How Effective Are They?

Thanks To North Korea, Nuclear Bunkers Are Making A Comeback – But How Effective Are They?

Those born in America in the 40’s may recall “Duck and Cover”—a public service announcement featuring an animated turtle named Bert who instructed American households on how to protect themselves in the event of a nuclear blast. While the effectiveness of this strategy has been called into question since the Cold War, the level of threat has not necessarily decreased in kind. In September, North Korea test-flighted a second missile over Japan only twelve days after its sixth nuclear weapons test earlier that month. Bunkers and fallout shelters are now seeing an uptick in sales, making their first revival since the Cold War.

In the 20-some years that have passed, has our emergency preparedness in the aftermath of a nuclear detonation become more effective, and are we now more prepared than we were before for a nuclear strike?

Virtually no city is prepared for a nuclear detonation –that is the verdict of a recent report by The Bulletin of the Atomic Scientists. While factors like location, subsequent fire blast, long-term radioactive fallout and even building shield coverage all affect overall level of destruction, a nuclear exchange would cause irreparable damage to the world. To contextualize matters, North Korea’s recent hydrogen bomb test, which was believed to be 120 kilotons TNT, dwarfs both atomic bombs dropped in World War II–the  “Little “Boy” on Hiroshima and the “Fat Man” in Nagasaki.

Melissa Hanham, a senior researcher at the East Asia Nonproliferation Program at the Middlebury Institute of International Studies at Monterey, reminds us that compared to a conventional weapon, a nuclear weapon is a different beast altogether. “It’s not possible to prepare for nuclear attack. There are not enough places to shelter, not enough emergency supply nor emergency responders to handle a nuclear exchange of this magnitude. Even if you were to survive the immediate blast, you would need to think about planning for the days, weeks, months– years afterwards.”

Joshua Pollack, editor of The Nonproliferation Review and senior researcher at the Middlebury Institute identifies the populations that would be at greatest risk. He believes that North Korea would be more likely to target U.S. military facilities, which are counterforce targets—a base which has military value— than population centers. But he doesn’t rule out the possibility. The principle behind attacking high-population areas is to frighten the adversary so much that they will not engage in a nuclear exchange – what’s also known as countervalue targets.

“Unfortunately, some of these [U.S. military] facilities are located in the Tokyo metro area. It is also possible that North Korea could threaten to attack Japanese cities in order to coerce Japan into curtailing wartime cooperation with the U.S.,” says Pollack.

A Brief History Of Wartime Bunkers

In South Korea, whose 25.6 million residents stand in the direct line of fire and which Kim Jong-un has threatened to turn into “a sea of fire,” there are currently more than 19,000 bomb shelters, including over 3,200 in Seoul, 25 miles away from the militarized border. But these shelters, which are mostly located in subway stations, basements and parking garages have no food, water, gas masks or medical kits readily available. In neighboring Japan, which has a less-than amicable relationship with Seoul due to hostilities carried over from World War II, Reuters reports that wartime shelters are largely unusable to the public. In other words, wartime bunkers are of limited utility, and are more or less remnants of a time bygone.

In the past, bunkers were widely used in the 1962 Cuban missile crisis alongside air raid sirens. While the Cold War was the golden age for fallout shelters, The Bulletin of Atomic Scientists observes that once glasnost— a Soviet policy of “openness” and democratization in 1980’s initiated by Gorbachev—set in, so too did complacency. As a result, shelters were left to rust and supplies left to dwindle. 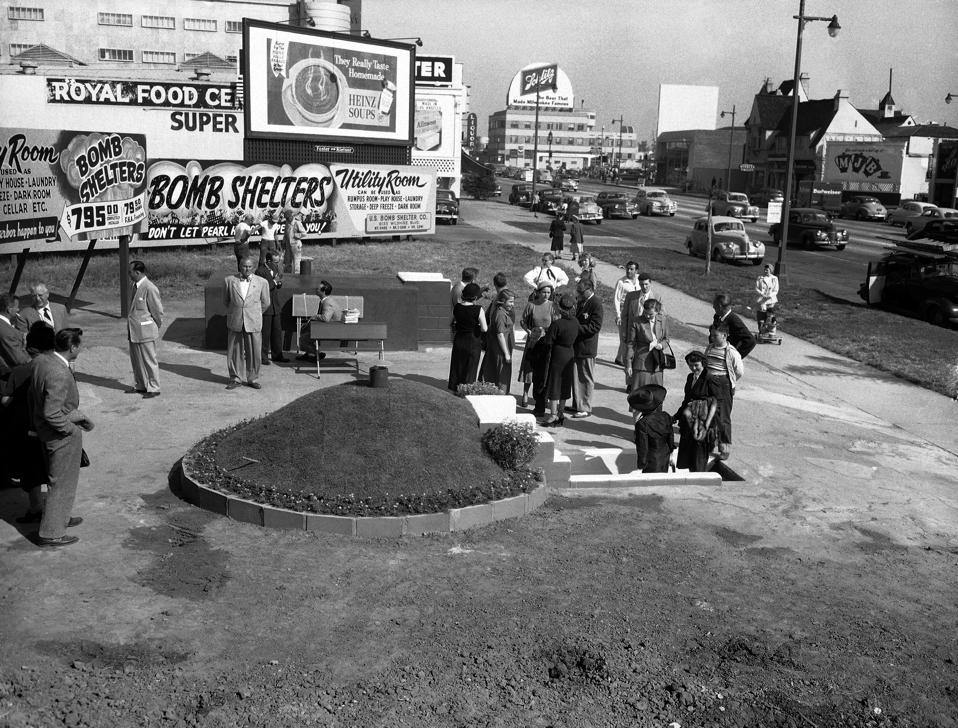 Public fallout shelters have also edged towards obsolescence because they cannot adequately protect against nuclear, chemical or biological attacks, and also require time to get to–time that civilians likely won’t have. As Timothy J. Jorgensen writes for The Conversation, “The main reason we no longer build fallout shelters is that as nuclear bombs have grown in size and number, the prospects of surviving a nuclear war – even in a shelter – have decreased.” Spending money on fallout shelters does not guarantee safety, and funding has instead been diverted to deterrence efforts.

Government-commissioned fallout shelters may be more symbolic than functional, and Hanham explains how their role has always been to dampen widespread panic and hysteria.   The catchy tune of “Duck and Cover” in particular provided comic relief, even when it belied much darker overtones of destruction. “Even in the Cold War, when people were asked to ‘duck and cover,’ it was largely to provide comfort and solace to the people,” she says.

A Burgeoning Market For Private Bunkers

While governments may no longer be building civil defense bunkers, there’s no denying that they do mitigate the effects of nuclear fallout. It has also carved out a niche market for the sale of personalized private bunkers, usually built underground or in the basement of one’s home. Nuclear shelter companies in Japan such as Shelter Co., whose shelters come equipped with anti-radiation air purifiers and tunnel exits have also proliferated, and Oribe Seiki Seisakusho in Kobe has reportedly received eight orders in April alone, compared to its usual average total of six in a year, Reuters reports. However, U.S. based bunker companies still command the lion’s share of fallout shelters, the most popular of which are the California–based company Atlas Survivaland Rising S Co. in Texas, both of which have seen an uptick in sales, according to Bloomberg. 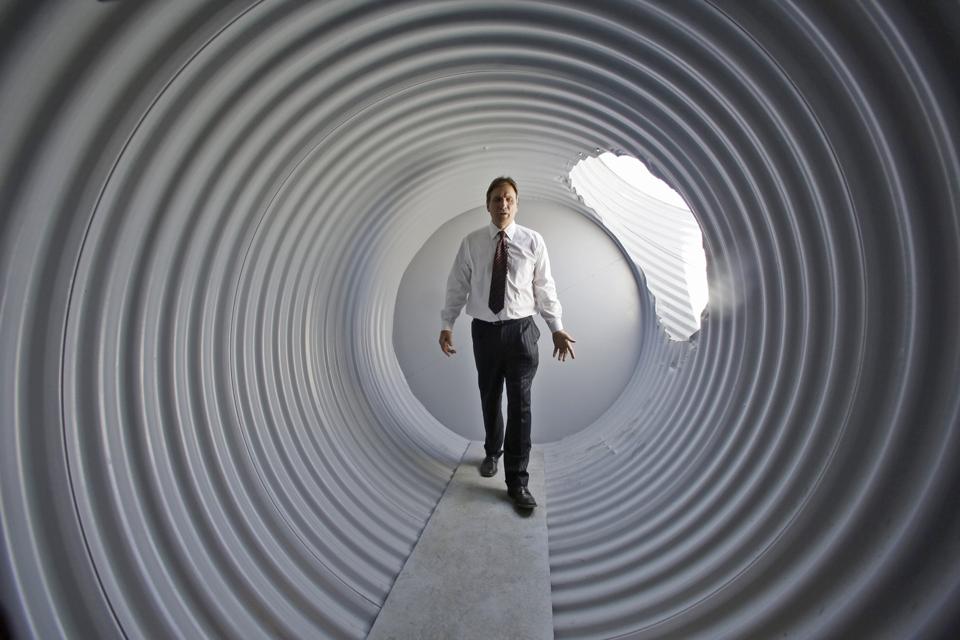 The obvious upside of these private bunkers include the benefit of proximity—assuming one is already home and can reach a shelter faster than a crowded metro station. Unlike wartime bunkers, they are also fully stocked and often built with protective materials.

That bunkers also increase the likelihood of survivability is indeed a hopeful sign in an otherwise grim situation. The War Monitor claims that radioactive fallout from a nuclear explosion loses intensity fairly rapidly. “Fallout emitting gamma ray radiation at an initial rate over 500 R/hr (fatal with one hour of exposure for 50%) shortly after an explosion, weakens to only 1/10th as strong 7 hours later. Two days later, it’s only 1/100th as strong, or as deadly, as it was initially.” This fact should be reassuring, suggesting that even staying in a shelter and waiting for radiation levels to decline can dramatically increase one’s chances of survival. During nuclear Armageddon, every extra minute afforded counts towards survival rates. 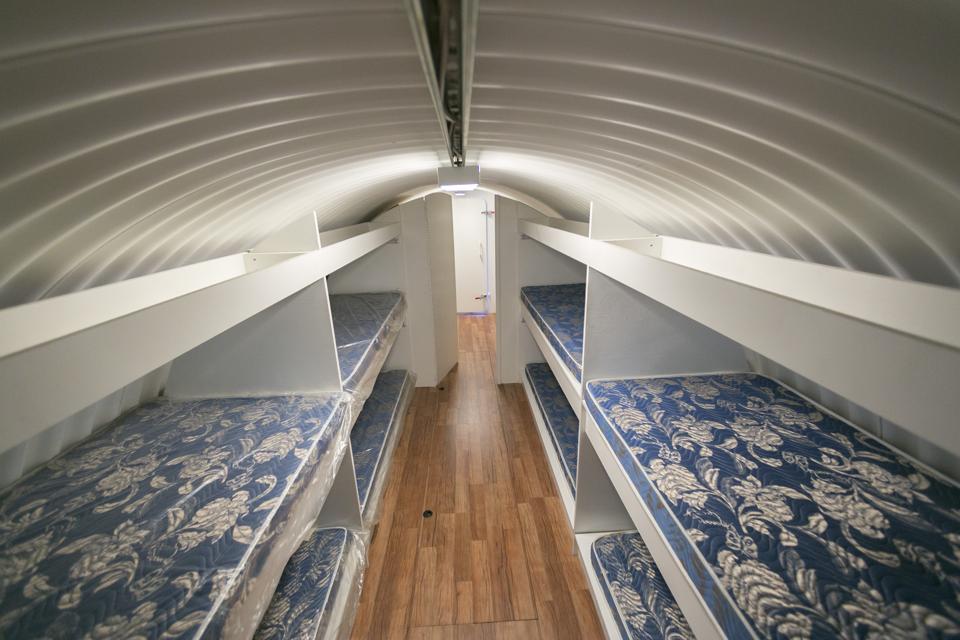 A Shift In Civil Defense Strategy

While civil defense bunkers have largely fallen into disuse, there has also been a greater focus on deterrence efforts and enhanced emergency public warnings. Japan continues to issue infographics that are vaguely reminiscent of “Duck and Cover,” but has also supplemented them with sophisticated missile defense systems. The BMD Sys­­­tems, or the Aegis Ballistic Missile Defense systems is a program developed to provide missile defense by intercepting short to immediate-range ballistic missiles.

Major U.S. defense contractors like Raytheon Co and Lockheed Martin Corp have also partnered with Japanese companies to develop new radars. Radars “contribute to the overall national defense system,” says Pollack, who also believes that that Japan’s missile defenses and public warnings are “the most advanced in the region.” 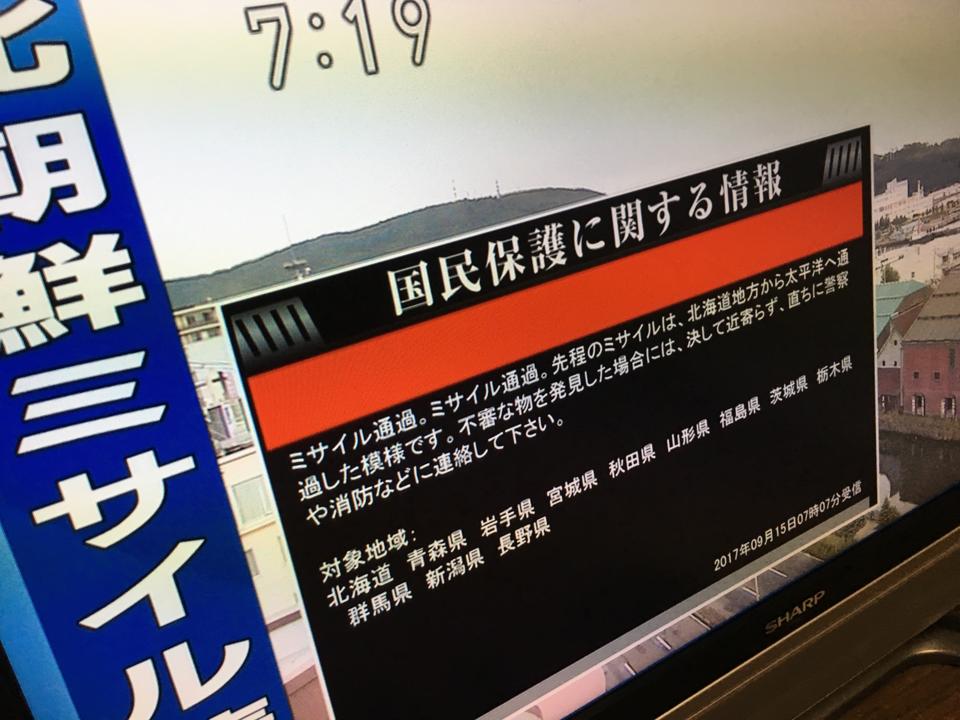 “Judging by how early and widespread recent warnings to take shelter have been in Japan, it appears likely to me that the J-Alert system is relying on U.S. space-based infrared data to detect missiles while they are still boosting. This gives members of the public more time to find shelter, but unfortunately also seems to require issuing warnings so early that it’s not clear where the missile is going,” Pollack says.

Pollack notes that there is a precedent for this approach. “Israel’s warnings to the public during the Iraqi missile attacks of early 1991 were issued based on U.S. space-based infrared data, conveyed to Israel from the Pentagon over a secure voice line. I would guess that the U.S.-Japan data connection is real-time, given the linkages between the two countries’ BMD systems,” he says.

This article was written by Sharon Lam from Forbes and was legally licensed through the NewsCred publisher network. Please direct all licensing questions to legal@newscred.com.