The government of North Korean dictator Kim Jong Un continues to test ballistic missiles capable of delivering nuclear warheads against distant targets. In July, Pyongyang demonstrated its missiles can reach the West Coast of the U.S., and perhaps deeper into the American heartland. In the aftermath of this week’s missile launch over Japan, President Trump has again warned of harsh consequences if North Korea does not desist, but as today’s Washington Post puts it, “there was no indication Kim was intimidated by the White House reaction.”

These rhetorical exchanges have been going on for many years — at least since the North exploded its first nuclear device in 2006. Yet despite abundant evidence of the progress Pyongyang’s program is making, there has been almost no public discussion of what a North Korean nuclear attack might mean for a major American city. Perhaps pundits don’t think Kim would ever have a reason to launch such a suicidal attack, or that U.S. missile defenses in Alaska and California could intercept the handful of long-range weapons he controls.

However, there are no guarantees. The main rationale behind North Korea’s nuclear program is to deter challenges to the power of the Kim family’s hereditary dictatorship. That requires holding at risk targets of great importance to potential attackers, particularly U.S. cities. It is not hard to imagine how this strategy might go awry in a military crisis, given Kim’s peculiar combination of arrogance and insecurity. It is also not hard to imagine the under-funded U.S. missile defense system failing to be 100% effective. 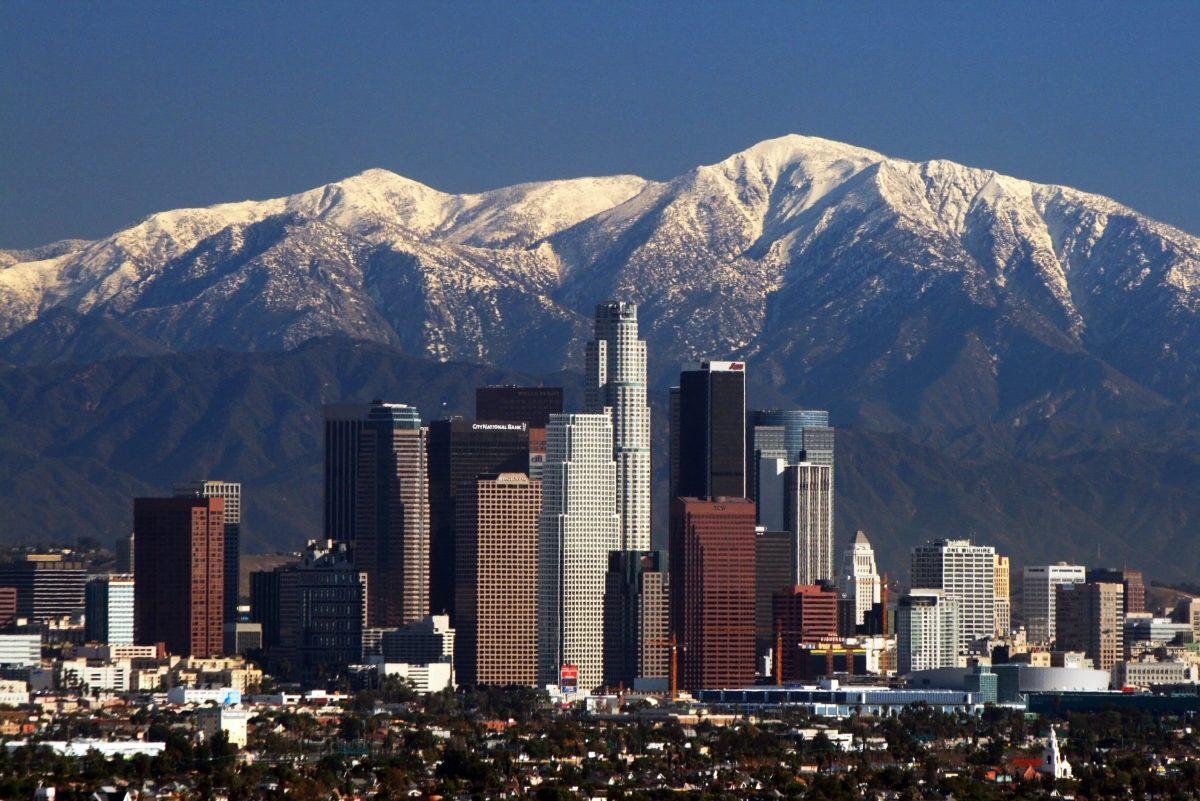 One North Korean nuclear weapon could destroy or render permanently uninhabitable all of the buildings in the Los Angeles financial district and adjoining Civic Center.

So perhaps Washington should start thinking in more concrete terms about what it will mean for America when North Korea’s unpredictable leader has a missile force and arsenal of warheads capable of destroying major U.S. urban centers, because that day is not far off. Let’s consider what a single North Korean warhead delivered against downtown Los Angeles might mean for that city, and for the nation.

Why Los Angeles? Because in the jargon of military planners, it is the most “lucrative” U.S. target within reach of Pyongyang’s missiles. With a metropolitan population of over 13 million, L.A. is America’s second biggest city, the biggest U.S. manufacturing center west of the Mississippi, and the de facto capital of our popular culture. Its productive output is two dozen times greater than that of all North Korea, making it an engine of growth for the U.S. economy. So L.A. is precisely the sort of target Pyongyang would want to hold at risk.

Assume, if you will, that the U.S. at some time in the future elects to undertake military action against North Korea aimed at removing Kim’s regime. Imagine that by the time that fateful decision is made, the North has a dozen nuclear-armed intercontinental ballistic missiles capable of reaching the U.S. West Coast and hitting within a quarter mile of intended targets. Pyongyang might at that point launch some or all of its missiles, and Los Angeles would be high up on the list of likely targets. What would the consequences be? 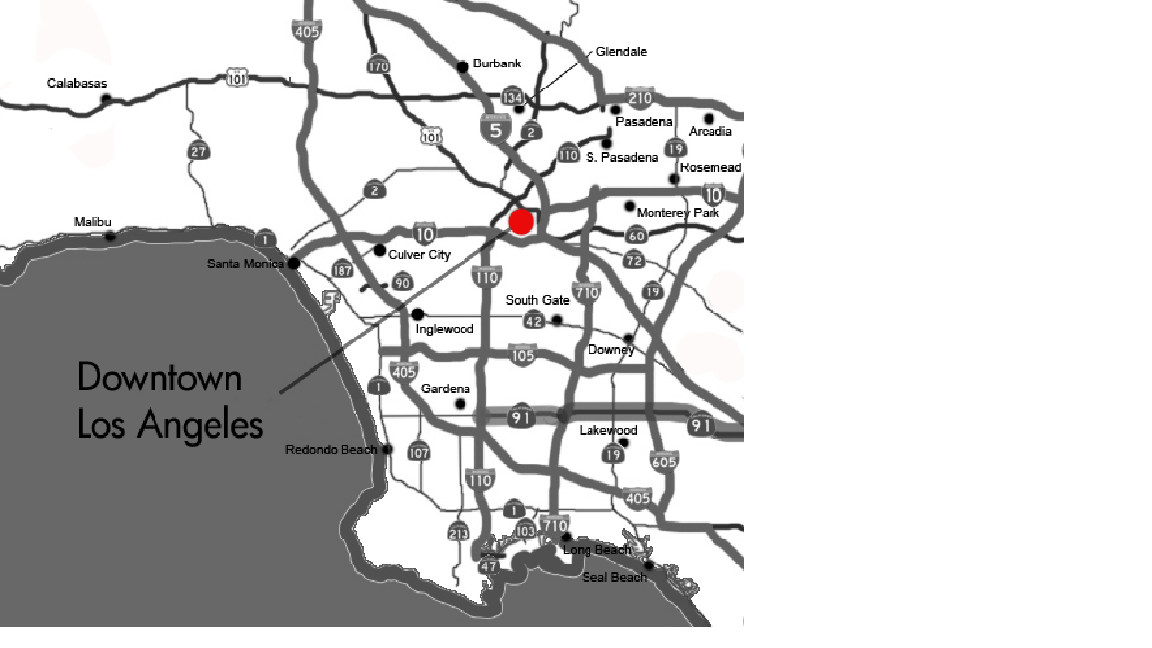 The red spot on this map marks the approximate location of ground zero in the nuclear detonation described here.

I’ll postulate that only one missile manages to penetrate U.S. defenses, and that its payload consists of a single thermonuclear warhead in the 500 kiloton range. 500 kilotons — the equivalent of 500,000 tons of conventional high explosives — was a typical yield for Russian missile warheads built during the closing days of the Cold War, and Pyongyang has undoubtedly secured designs for constructing such weapons. So let’s say that one weapon detonates a mile above the obvious aimpoint, the L.A. Civic Center and financial district in the downtown area.

All of the structures within a half mile radius directly under the point of detonation would be either totally destroyed or rendered permanently unusable. That would include City Hall, the Federal Building, the L.A. County Courthouse, and the police headquarters in and around the Civic Center. It would also include all of the city’s tallest commercial buildings in the adjacent financial district and Bunker Hill neighborhood, including such iconic structures as the Wilshire Grand, U.S. Bank Tower and Aon Center. All gone within a few minutes.

But that is just the zone of total destruction, stretching out to a radius where “overpressures” generated by the nuclear fireball’s shock wave reach 25 pounds per square inch or greater. That’s 25 psi above the ambient sea-level pressure of 14.7 pounds. According to the most authoritative source on the topic, damage from overpressure begins at only a half pound above ambient levels, so there would be a much greater area of heavy (but not total) damage stretching out three miles from ground zero.

That’s the distance to which overpressures of 5 psi would extend. The blast wave of displaced air, which can generate winds of hundreds of miles per hour near ground zero, constitutes about 50% of all the energy released by a nuclear explosion within the atmosphere. But then there is the 35% of energy released that is thermal, which would spawn hundreds of fires out to a radius of six miles — roughly from Glendale in the north to Watts in the south, and from West Hollywood to East Los Angeles. Many if not most of the people in this area would be killed or injured.

Unfortunately, those are only the grossest and most visible consequences of a nuclear explosion. There would also be prompt and delayed radiation effects — the latter in the form of ”fallout” that could be carried many dozens of miles by prevailing winds — and there would be an electromagnetic pulse capable of disabling delicate electronic devices to a distance of several miles in every direction. Even looking at the fireball from as far away as Burbank or Torrance could be permanently impairing, since it would appear many times brighter than the sun.

There’s no good news in this story, but the fact that L.A. is spread out over 500 square miles and consists mainly of low-rise buildings would tend to mitigate damage compared to a detonation over, say, Manhattan. Nonetheless, there would likely be over a million casualties of one type or another, and virtually every critical network — the electric grid, medical services, law enforcement, etc. — would collapse within a few miles of downtown. Organizing first responders with the core of city government gone would be very difficult.

The bottom line here is that a dangerous and unpredictable dictatorship is about to acquire the capacity to visit unprecedented destruction on one (or more) of America’s most important urban centers. At the very least, Washington needs to bolster the missile defenses it has constructed to intercept a North Korean attack, and fast. But it also needs to think seriously about offensive military action to defeat the rising danger before fear of nuclear retaliation narrows its options and negates the value of its conventional military forces.

This article was written by Loren Thompson from Forbes and was legally licensed through the NewsCredpublisher network. Please direct all licensing questions to legal@newscred.com.